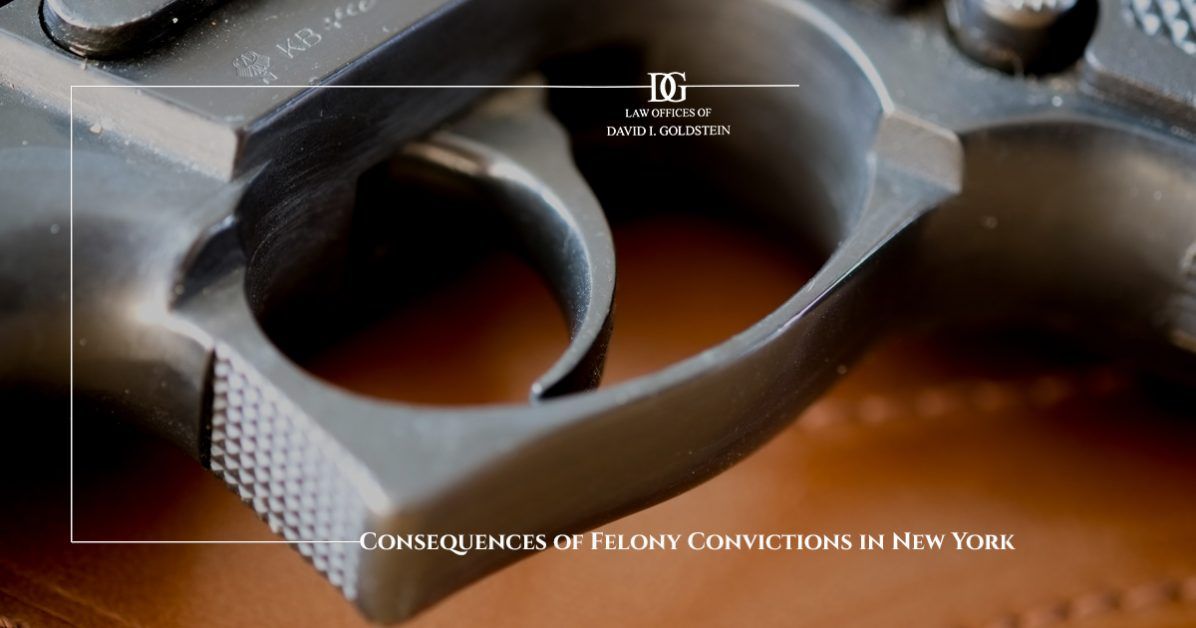 When you’re facing felony charges in the state of New York, you want to do everything you can to ensure you have legal representation that will help you fight for your rights. Because felonies can be so serious in nature, so are the consequences if you are convicted of one, and if you’re wondering what rights may be in jeopardy if you are handed a felony conviction, you’re not alone. In today’s blog, we’ll review a few constitutional privileges that may be impacted by an untimely conviction.

If you are a resident of Chestnut Ridge or the surrounding area and you are facing felony charges, you deserve high-quality legal representation to make sure you receive the most favorable outcome on your case. The criminal justice attorneys at the Law Offices of David I. Goldstein are here to help. Call us at 845-208-4930 today for a consultation.

RIGHTS IMPACTED BY A FELONY CONVICTION

A competent criminal justice attorney is vital to ensure you receive the most lenient and fair sentence possible when you are convicted of a felony. This is because once you are convicted, several of your rights as a citizen may be impacted. We’ve listed a few of the primary ones below.

Under the Second Amendment of the United States Constitution, the right of the American people to keep and bear arms “shall not be infringed.” However, when you are convicted of a felony, this constitutional right is jeopardized, both at the federal and the state level. If you are convicted or indicted of a felony, you will be unable to sell or dispose of ammunition or firearms, and you’ll also be prohibited from possessing a firearm under federal law. In terms of state-specific restrictions, you may be prohibited from possessing a firearm or receiving a firearm license.

Eligibility to vote in our country’s elections is determined by both federal and state laws. Thanks to the Constitution, we all have the right to register to vote if we:

Under state law, when you are convicted of a felony in New York, you are disqualified from voting while in prison or on parole. Once your parole period has been satisfied, the state automatically reinstates your right to vote.

Regardless of what your occupation is, when you receive a felony conviction, there are likely to be significant consequences. The specific ramifications may vary depending on your occupation and the nature of the felony charges. For example, if you are an employe of the United States government and you receive a felony conviction for inciting or organizing a riot or civil disorder, it is very likely that you will be removed from federal office and declared ineligible for government employment for five years. Additionally, if you have a felony conviction on your record, you’ll also be ineligible to enlist and serve in any armed forces position unless you receive a special exception.

When it comes to deciding how many children you want to have and who you want to marry, most people don’t like to have any type of restrictions imposed on them. However, if you are convicted of a felony, some of these privileges may be in jeopardy. For example, in New York, a life sentence can render you “civilly dead” and unable to marry while serving your time. If you are married at the time of conviction, a sentence greater than three years is considered eligible grounds for an at-fault divorce in New York. It’s also likely that the state may seek termination of your parental rights or your future right to adopt a child.

Need a Reputable Criminal Justice Attorney? We Can Help!

Depending on your unique situation, it may be possible to get some of these rights reinstated after they have been revoked. Consulting with a reputable criminal justice attorney is the best way to ensure you receive accurate information on this matter. In the state of New York, you may be able to apply for relief under specific circumstances to restore rights that you may have lost because of a felony conviction. Unfortunately for some of the more serious felonies, there is no available relief or restoration of rights that have been lost.

When you want to ensure your privileges and constitutional rights are upheld as much as possible following a felony conviction, call on the criminal justice attorneys at the Law Offices of David I. Goldstein. With more than 50 years of combined experience, we have an incredible amount of knowledge and experience to offer out clients. To get started, call us at 845-208-4930 today.